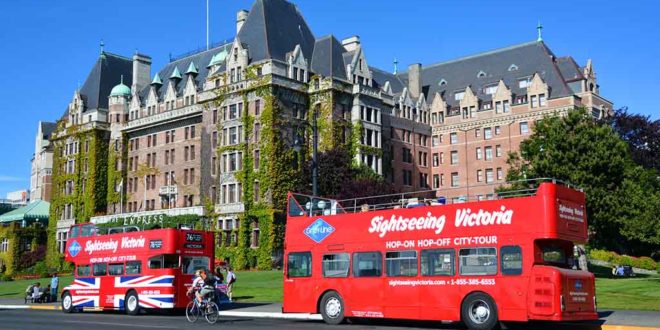 The famous British author Rudyard Kipling wrote that Victoria was the jewel in the crown of Britain’s Pacific Empire. It’s a jewel that still has some luster judging by the fact that over three million people a year like to visit. Victoria is set in a spectacular natural environment in addition to having a vibrant cultural scene. Like many top travel destinations however, it is easy to spend lots of money during a stay. This article takes an insider’s look at some fun activities that are free, or almost so. There are no charges for the items suggested below, unless noted.

What better place to get started than in the heart of it all? Victoria is the capital of BC, and you can tour the parliament buildings with a knowledgeable guide. This structure was built at a time when money was not a prime consideration for these sorts of projects, and it still has the power to cause jaws to drop. The eccentrically named Old Cemeteries Society conducts tours of the Ross Bay Cemetery. And yes, eccentrics are their business. Stories are told of the various explorers, fortune seekers, schemers, dreamers, and rascals that populated Victoria’s past. This non-profit society asks $5 per tour, or $2 if you join the society. Victoria is also the west coast base of Canada’s navy. Tours of this historic facility are conducted during the summer months. If you are the do it yourself type, then a visit to the City of Victoria website will yield an interesting find. There are four downloadable self-guided tours, maps included that cover many highpoints of the city.

There are a number of parks in the Victoria area offering scenic viewpoints. Many are administered by the Capital Regional District, which provides a program of interpretive talks during the summer by qualified naturalists. Hiking ranges from multi-day trips such as the Juan de Fuca Trail (check with BC Parks), to short strolls like Whitty’s Lagoon. The latter is a compact park that includes rainforest, waterfall, tidal lagoon, and sand beach, all within a half hour stroll. A few parks charge for parking, but otherwise you can leave your wallet tucked away. For newcomers, a good way to experience the outdoors is to join in with a local hiking club on one of their outings. Club Tread and the Victoria Outdoors Club both have lots of weekend activities, just be sure to call ahead.

If a slightly more urban experience was what you had in mind, you’re still in luck. There are several excellent walks in the city, where you will never be more than a couple of minutes away from a cappuccino or latte. The Songhees Walkway winds around the inner harbour area for about five kilometers (three miles), giving views of the downtown skyline, and close ups of marine and seaplane traffic. Beacon Hill Park is an urban oasis adjacent to downtown. It features a hilltop viewpoint of mountains, ocean, and city, elaborate gardens, and a petting zoo for the kids. The park extents along the cliff tops and beaches beside nearby Dallas Road. If you are a garden enthusiast, you should really stop here and pull out your yellow highlight pen. Some of the most elaborate gardens anywhere are accessible to you by simply pulling on a pair of walking shoes. Rockland is a long established neighborhood in Victoria, once the home of the affluent, but still the home of long established and impressive greenery. Walking a mile or so from the downtown core will put you in touch with some of these horticultural endeavors. This neighborhood is also the home of the Governor General, the Queen’s representative in BC. Government House is surrounded by elaborate gardens that are open to the public, year round. A walk up nearby Fort Street will take you past art galleries and several blocks of antique stores. A few more blocks up the street and you will be at the Victoria Art Gallery, which occupies an old heritage house. The gallery admission is by donation on the first Tuesday of every month.

One word of caution for those who like to swim. Don’t try it in the ocean in this vicinity. The University of Victoria is a world leader in research into hypothermia, and local interest in the subject is a factor in their efforts. The good news is there is very pleasant lake swimming available. Elk Lake and Beaver Lake are popular, and only twenty minutes from the city. If the weather is cool several municipally run recreational centers can provide a good alternative. The commonwealth pool, about nine kilometers (six miles) north of town claims a world-class pool. The Oak Bay Recreation Center, just east of the downtown area, has a large pool with waterslides and hot tub. Admission is nominal, around $5 per adult, less for children and seniors.

If you have packed some of the foregoing into your day, you may be ready to chill out and relax at this point. In the summer months the inner harbour area of Victoria is usually packed with people. Buskers perform a variety of acts, and artisans ply their crafts, others just go to people watch. Musical acts are available in many clubs about town, but during the summer there are numerous free events. Market Square, Centennial Square, downtown, and the Cameron Band shell in Beacon Hill Park all host musical acts throughout the season.

Getting around by foot in Victoria is fairly easy as it is a very compact city. Next to shoe leather, a cheap option is provincially run BC Transit. Taking a bus will get you to most locals, and some of the routes are rather scenic in themselves. Buy a block of ten tickets for $20.25 (adult fare). At about two bucks a ride, it’s a deal.

Try some of these suggestions and you can save your credit card for a few splurges.