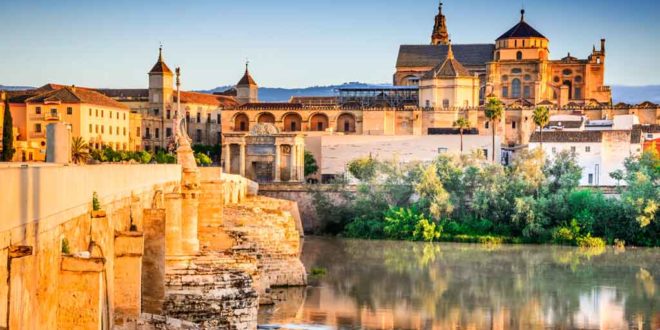 Córdoba in Andalusia is popular with day trippers wanting to visit the famous Mezquita-Catedral, Córdoba’s great former mosque, which is now a cathedral. However, this city, which was once the intellectual center of Europe, has much more to offer visitors. Indeed, Córdoba is an ideal destination for a city break in its own right. Here are five sights that shouldn’t be missed when visiting Córdoba.

Just because it is a popular tourist attraction, doesn’t mean this important heritage site should be ignored. The Great Mosque of Córdoba was an important religious center of the Islamic faith for almost 500 years. During that period the building was expanded many times as the local population grew and the city thrived. In the early thirteenth century the mosque was turned into a Catholic cathedral. Now the cathedral-mosque is famous for its opulent interior. More than 800 original columns, made from marble, onyx, granite, or jade, still survive, and much of the interior is still decorated with colorful glass, mosaic, and geometric designs. The richness of the decoration is utterly absorbing; the building is a true work of art.

The Jewish Quarter is one of the quaintest parts of the city. It is a maze of narrow streets, packed with countless shops, restaurants, tapas bars, and a small market, where since Moorish times a daily market is held. The most typical street of the area is called Calle de los Judios. There you can find a medieval synagogue, one of the few remaining in Spain. After dark the small streets are lit with atmospheric lighting, making for a pleasant after-dinner stroll.

If you only have time to visit two museums, the best choices are the Archaeological and Ethnological Museum (Museo Arqueológico) and the Museum of Fine Arts (Museo de Bellas Artes). The Archaeological Museum displays many objects from the rich Roman history of the city, and the complex even contains the remains of a Roman theater. On the upper level of the museum you can find objects from Moorish origin. The Museum of Fine Arts has many famous paintings from the Spanish Baroque era, from artist such as Murillo and Valdés, and is also home to three Goya’s.

This impressive palace, located in the Old Town, is the product of 500 years of improvements. Originally built in the fourteenth century and not finished until the nineteenth century by its then owners, the palace boasts hundreds of antiques including furniture, tapestries, sculptures, and ceramics. The palace is also known for having no less than twelve patios and a beautiful formal garden.

On the outskirts of Córdoba lies the archaeological site that once was the capital of Muslim Spain, al-Andalus. The Muslim city of Medina Azahara was completely destroyed in the early eleventh century in a civil war. From the rubble left over it is difficult to imagine the former splendor. However, enough remains to build a picture of the beauty of the Moorish palace, mosque, and gardens, especially when you take a tour with a guide, who can bring the complex to life with fascinating stories.

When you have had your fill of history, you can enjoy what modern Córdoba has to offer you. There is shopping in Spain’s famous department store El Corte Inglés or on one of the local markets and dining in one of the many tapas bars in the Jewish Quarter. You won’t be disappointed by this vibrant Andalusian city, which so elegantly combines a rich historical past with modern facilities and lively entertainment.